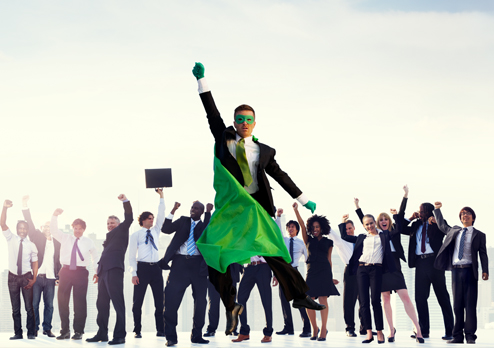 The difference between the master and the beginner is that the master has the ability to stand in the face of no results for a longer period.

Often we find ourselves looking, and wishing, for so-called quantum leaps in our life; when what we should probably be looking for are incremental gains.

It is important to remind ourselves that the quantum realm is so minute that it cannot be seen with the naked eye. An ordinary optical microscope cannot begin take the eyes that deep. Physicists must use a powerful electron-microscope to even begin postulating an atom, much less an electron.

While it is all relative, and because we are using sub-microscopic measures, we do not really know how far in the third dimension a so-called quantum leap might be. Maybe instead we should consider how our own experience tells us leaps (should we say, gains) are made in our daily life.

Since we are looking at “leaps,” let us take a look at the most common and impressive jumps that are possible to make physically.

First, in the unassisted high jump, the world record is 8 ft. ¼ inches, just a few feet beyond the current average height of a man.

If we go to the assisted pole vault, the world record is 20ft. 2.5 inches. Twenty feet, while impressive, is certainly not Superman “jumping tall buildings with a single bound.” And remember, 20 plus feet only happens with assistance.

But for most of us… even these athletic feats are well outside of our physical capability. So let us bring it down to an even more practical daily level.

Although we do not like it, even the fittest of us can climb a set of stairs two steps at a time… maybe three if we really stretch. In the grand scheme of things 2-3 steps does not seem like a lot; and they are certainly not giant leaps.

Hundreds of people climb the 1665 steps to the top of the Eiffel Tower. While it is quite a climb, if you take it one step at a time, persist and persevere, and keep your vision, you will eventually get there. Is there a metaphor here? Yes… I think there is.

The Beatles landed their first major gig in a burned out converted strip-club in Hamburg, Germany. The accommodations were atrocious to say the least. The proprietor also owned a run-down cinema around the corner where the group slept each night.

Their luxurious dark and dank accommodations were three absolutely airless dressing rooms… which had not been cleaned since years earlier when the theater was actually in business.

The washrooms in the cinema toilets were where they made ready each night before beginning their seven day a week schedule.

Again, this repeated seven nights a week; and when they first began playing, there were only 2 people who showed up to listen!

The now famous icons logged a full forty-eight nights in a row before the owner finally decided it was better to switch the club back to its former glory as a strip-club.

Paul McCartney stated in an interview, “We were always trying to attract people in. This was one of the great learning experiences for us, to attract people who do not really want to see you. It came in handy later when we were doing something for people who had come to see us.

“The first thing people would look at was the beer price, then they would look around and there would be no one in the club; and we would immediately jump into action. You really have to learn that, and by God we learned it.”

And remember… this is only a portion of the Beatles story as they methodically and incrementally rose to stardom.

What would it have cost the world of music if the Beatles, one of the most influential bands on the entire industry, and in the entire world, had not persevered?

The answer is self-evident.

“From the moment that we first played as the Beatles we knew we were the best band in the world. We were just waiting for the rest of the world to catch up.” ~ John Lennon

For every person that has made significant impact in their particular area of genius, there is a similar story.

And every Martha Stewart… just to name a few.

Please remember, beyond the romanticism and quick fix hype… it is in the struggle that potential greatness is born. Those who achieve greatness invariably have a growth mindset versus fixed.

I recall way back in 2006, after the movie “The Secret” came out, and I started preaching its philosophies and reached a degree of notoriety, people started saying, “That is him who just came out of nowhere. He is an overnight success!”

Little did they know that I had invested a previous ten years in struggle, hard work and obscurity (and still doing the same) to have any semblance of celebrity or notoriety.

It took me fifteen years to become an overnight success!

Persevere! Be willing to invest at least ten years in obscurity to leave an eternal legacy.

Perseverance is downright hard. Sometimes it feels next to impossible. Sometime it feels insane. But it is vitally important to your ultimate success, wealth, and fulfillment nonetheless.

Let us be really honest. Real life is not really easy by traditional definition… But it can be significant.

True and lasting success comes in the significance. It comes in the meaning and purpose of what your life is lived for. Please read that again.

I cannot recall a time when I have spoken to a live crowd that someone did not come up to me and say something to the effect of, “I want to do what you do.”

Truth told you want to do what “you think” that I do. Because it is 99.9% certain that you do not have a clue what I really do.

Do you really know what our biggest challenge is? We do not listen. Period!

If you have skills they are a gift of grace. Work at them. Do not talk about them. Work at what you have been given. Work hard. Let the fruits of your labors speak for you. Persevere.

Nothing good in life comes free. If you are truly committed, be willing to pay the price and make the investment for your prize. Step up. Persevere.

Perseverance is not that exciting… but it is every bit as fundamental to success as tungsten is to steel.

From my own life experience, as well as my experience with hundreds of thousands of others, the part of you that has to verbally announce yourself is your own insecurity; and your own fear and disbelief.

True power and awareness is an understanding that whatever external gifts you have been gifted are a gift of grace.

Make no mistake here. You are given a gift; and there is “always” hard work and perseverance involved – always!

But even then… many work hard and are not gifted with external gifts (a.k.a. tangible external results).

This does not mean that there are no results… nothing could be further from the truth. There are always results! They just often come in different forms.

When this principle is grasped fully, we begin to live for the sake of living versus the sake of achieving.

The pursuit of extrinsic rewards is the major cause of the current unrest and disengagement of the mass majority. Please read that again… and again.

In our current world model, we have lost our way in the pursuit of meaning while being too busy chasing money. In so many ways we have attempted to trade money and materialism for meaning. Please ponder that long and hard – because while they can functionally co-exist they are not one and the same.

Focusing solely, or largely, on extrinsic rewards causes us to sell ourselves short in the perseverance department. Because when the rewards are not intrinsically present – and let us face it, external rewards often come slowly – we quit.

The auto telic personality (proven to be the most highly functional and happy) sets its own goals and intentions based upon intrinsic rewards. This champion is not swayed by external programming and pressures. Are you? Intrinsic rewards are immediately felt and achieved the moment you take the first step of your own choosing. This is true wealth and success.

When you are consistently intrinsically rewarded… perseverance is a given. It does not have to be trumped up, muscled or forced. For intrinsic rewards are immediate, consistent, and immanent.

What are you pursuing? Do you quit quickly and easily? Is persistence and perseverance a given for you? Are you seeking quantum leaps or reveling in your intrinsic purpose and incremental gains?