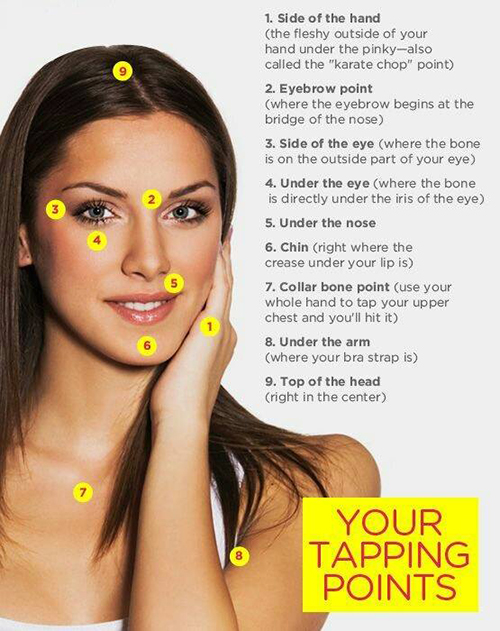 The technique has been clinically shown to reduce depression, anxiety, traumatic stress, phobias, pain, cravings, negative emotions (for example anger, sadness, grief, fear, hurt, guilt) as well as negative memories. Once negativity is cleared it creates a feeling of well-being and calm.

EFT combines tapping on acupressure points while repeating specific phrases releasing stress and emotional traumas. The technique integrates ancient wisdom and the science of acupuncture with modern day psychology without the need for needles.

Negative emotions cause a disruption of the body’s energy system. By tapping on the acupuncture points and saying phrases out loud, EFT re-wires the energy system creating a feeling of peace, calm and letting go. In many cases after EFT, people experience a shift in thinking that is more empowering.

The Theory behind EFT

Once the energy system is balanced, the emotional charge goes away. The underlying idea here is that you are not “mentally blocked”. Rather you are “energy blocked”. When you use the simple EFT tapping steps, you clear through blocked channels.

Most of our emotional and physical problems are caused (or contributed) by our unresolved specific events. When you use EFT it gives relief by re-wiring the energy system and bringing it back into balance so you feel calmer, more at peace and ready to let go and move on.

Consider each of your negative emotions or specific events as a tree in a negative self-image forest. They might be reflective of things from your past like rejections, abuse, failures, fears, guilt etc. There may be hundreds of them and they may be so thick as to resemble a jungle.

But what would happen if you methodically cut down one tree per day? Gradually, the forest would thin out. You would have more room to move within it and it would be a freer place in which to reside. Eventually – with persistent use of EFT – all the trees disappear and in their place is a much more emotionally free you. The world looks different when the forest (or jungle) is gone and a new self-image emerges.

Clear the past to be in the present and create the future! Create health and happiness with Emotional Freedom Techniques.