Put Your Health Literally into Your Hands 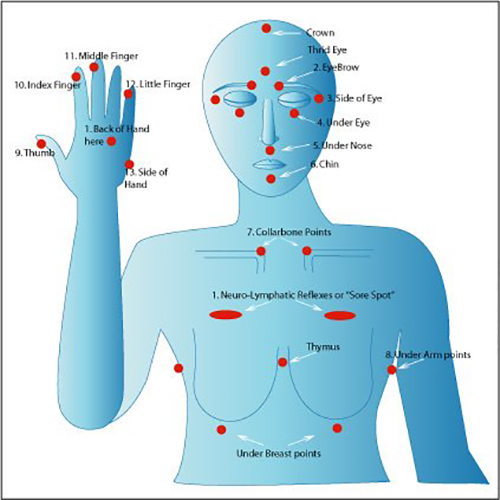 Put Your Health Literally into Your Hands

What if someone told you that you could actually change your health - both physical and emotional - with that same tapping motion would you believe them? You should. Recent studies have shown that simply tapping your fingers on specific points on your body can help ease anxiety and depression, alleviate pain, and even aid in weight loss.

What is EFT and how can it unlock Your Health?

Emotional Freedom technique is a kind of psychological acupressure. It uses acupuncture / acupressure points to release emotional issues and even physical pain. Sounds skeptical? But stay with this as you will be pleasantly surprised at the data that backs this up.

In acupuncture, there are 12 major pathways called meridians. The meridians move energy through the body like invisible rivers, flowing deep into the interior of the body through organ systems and skin surfaces. When the energy flow stops or is blocked, the corresponding internal organ system manifests symptoms of disease.

Along all the meridians, there are places where the energy surfaces on the skin. These are called acupuncture points. In acupuncture, these points are stimulated with a fine needle. In acupressure, they are stimulated by hand pressure; and, in EFT, meridian tapping with your finger stimulates these points.

But EFT takes things one step further by employing affirmations simultaneously with the tapping solution. The theory is that addressing your physical or emotional concerns then stating an affirmation that addresses the concern, all while tapping the acupuncture points, helps you to clear the energy block and allow you to restore both your emotional and physical balance.

EFT Works at the Energetic Level

Here is where most people need convincing. Tell someone, especially someone in the scientific community, that something works at the “energetic” level, and their eyes glaze over.

In fact, that is precisely what happened to Dr. David Feinstein from the department of psychology at Johns Hopkins.

Tasked with learning more about this “energy work” being done in California, Dr. Feinstein read books, talked to therapists, and even attended workshops on a wide range of energy healing therapies.

Ever the skeptic, even he was impressed by the work done by UCLA’s Human Energy Fields Laboratory, which found that the areas of the skin commonly associated with acupuncture points actually emit electrical vibrations of a significantly higher frequency than other points on the body.

Then you have Japanese scientist Masaru Emoto, in his fascinating book Hidden Messages in Water, explaining how every cell in your body vibrates at a specific and unique frequency. And every human being has the ability to detect the individual vibrations of the people around them.

This is their energy field.

To give you an example, picture yourself sitting in a chair with your back to the door. If someone enters the room, you often know they are there, even if you don’t hear or see them. You just know they are there! This is the energy field, their vibrations that you pick up on.

It is this same energy field that is at work with EFT.

While additional EFT research is likely right around the corner, the studies that do exist lay quite an impressive foundation. The groundwork for giving EFT the credibility it deserves is already being developed in the scientific community.

More than 50 researchers in over seven countries have studied EFT. Their findings have been published in more than 15 different peer-reviewed journals, including the Journal of Clinical Psychology, as well as the American Psychological Association’s journals Psychotherapy: Theory, Research, Practice, Training and Review of General Psychology.

In fact, many EFT researchers are affiliated with prestigious universities and institutions, such as Harvard Medical School, the University of California at Berkeley, Johns Hopkins University, Texas A&M University and even Walter Reed Army Medical Center. It has been used by the British and French militaries and approved by the British equivalent of Medicare — the British Health Service.

How Exactly Does EFT Work?

It appears that EFT works by moving trapped, painful memories (be it emotional or physical) from one part of your brain to another. There is a part of your brain called the amygdala that is responsible for processing and remembering emotional reactions to events, people, etc. The amygdala is an almond shaped mass of nuclei located deep within the temporal lobe of the brain. It is a limbic system structure that is involved in many of our emotions and motivations, particularly those that are related to survival. The amygdala is involved in the processing of emotions such as fear, anger and pleasure. The amygdala is also responsible for determining what memories are stored and where the memories are stored in the brain. So long as a feeling, memory or thought is housed in your amygdala, you will continue to react to it.

EFT seems to help move the negative emotional responses that are trapped in the amygdala and move them to your hippocampus, the area of your brain that stores short and long term memories. The hippocampus is the part of the brain that is involved in memory forming, organizing, and storing. It is a limbic system structure that is particularly important in forming new memories and connecting emotions and senses, such as smell and sound, to memories. The hippocampus is a horseshoe shaped paired structure, with one hippocampus located in the left brain hemisphere and the other in the right hemisphere. The hippocampus acts as a memory indexer by sending memories out to the appropriate part of the cerebral hemisphere for long-term storage and retrieving them when necessary.

So, while the memory is still there in your brain, you no longer react to it. That is why just a few treatments appear to have a lasting effect. It is like having a photo that was taken on a particularly bad day on display in your bedroom. If you have to see it every day when you wake and again when you go to sleep, it is pretty hard to ignore it.

But if you move the photo into a box in your basement, the photo is still in your house, and you still remember it was taken, but it is not in front and center of you every day, stirring negative thoughts.

Get the Benefits of EFT

Since the concept of EFT is eyebrow-raising, it is suggested to go ahead and be skeptical, but stay open to the possibility of a new healing modality. Remember, everyone laughed at Columbus when he said the world was round, not flat. And Galileo was placed under house arrest for asserting that the sun, not the Earth, was the center of the universe.

So, while you cannot go to a health food store and purchase EFT or, God forbid, have your doctor write you a prescription for it, which does not mean it is not viable. The research and credentialed support of EFT alone tells us that there is something undeniable about the benefits of the Emotional Freedom Technique. And, best of all, EFT is virtually free. While you can get the help of EFT practitioners, you can also do EFT on yourself, so why not try it? The only thing at risk is your time.

There are many books, online tutorials, and even workshops that offer EFT training. They will help you find the correct acupuncture points and help you craft useful affirmations that you can use when utilizing the technique. No matter which form of EFT you use, you will be sure to tap your way to better emotional, physical and psychological health.