The Legend of the six Blind Men and the Elephant 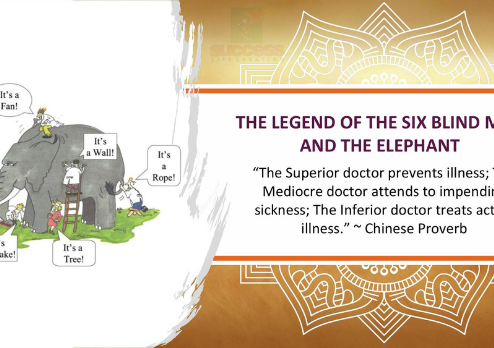 Each of the blind men was partly right based on his own subjective perception - but at the same time, mostly wrong. The comical part of it all is that their dispute stemmed from utter ignorance because none had ever seen the elephant!

One would think that because the medical and pharmaceutical industries have grown as large as they have, that we would have less sick people in the world. But the opposite is actually true. There are more sick people than at any other time in history - not just in actual numbers but as a percentage of the population. This, in no way, is intended to discredit doctors, medical practitioners and institutions that have genuinely good intentions of helping to heal people and eradicate disease.

It simply points to an ineffective medical system that is focused on illness rather than wellness, that promotes expensive (i.e., profit-driven), invasive and potentially dangerous (or even deadly) medical procedures, drugs or treatments rather than simple, natural, inexpensive, effective treatments or therapies that have no side effects.

You can view this video: https://www.youtube.com/watch?v=-eaO4aE_uYk