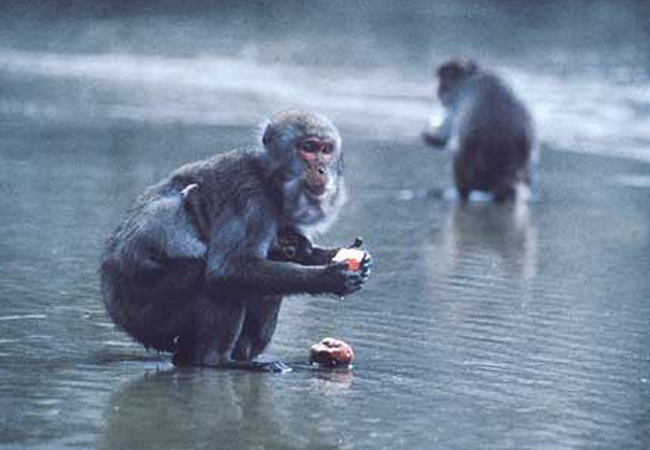 The following is a story is based on research with monkeys on a northern Japanese Island, and its central idea is that when enough individuals in a population adopt a new idea or behavior, there occurs an ideological breakthrough that allows this new awareness to be communicated directly from mind to mind without the connection of external experience and then all individuals in the population spontaneously adopt it. "It may be that when enough of us hold something to be true, it becomes true for everyone."

The Japanese monkey, Macaca Fuscata, had been observed in wild for a period of over 30 years.

In 1952, on the island of Koshima, scientists were providing with sweet potatoes dropped in the sand. The monkeys liked the taste of the raw potatoes, but they found the dirt unpleasant. An 18-month-old female named Imo found she could solve the problem by washing the potatoes in a nearby stream. She taught the trick to her mother. Her playmates also learned this new way and they taught their mothers too. This cultural innovation was gradually picked up by various monkeys before the eyes of the scientists.

Between 1952 and 1958 all the young monkeys learned to wash the sandy sweet potatoes to make them more palatable. Only the adults who imitated their children learned this social improvement. Other adults kept eating dirty sweet potatoes.

Then something startling took place. In the autumn of 1958, a certain number of Koshima monkeys were washing sweet potatoes – the exact number is not known. Let us suppose that when the sun rose one morning there were 99 monkeys on Koshima Island who had learned to wash their sweet potatoes.

By that evening almost everyone in the tribe was washing sweet potatoes before eating them. The added energy of this hundredth monkey somehow created an ideological breakthrough.

The most surprising thing observed by these scientists was that the habit of washing sweet potatoes then jumped over the sea. Colonies of monkeys on other islands and the mainland troop of monkeys of Takasakiyama began washing their sweet potatoes.

Thus, when a certain critical number achieves awareness, this new awareness may be communicated from mind to mind. Although the exact number may vary, this Hundredth Monkey Phenomenon means that when only a limited number of people know of a new way, it remain the conscious property of these people. But there is a point at which if only one more person tunes-in to a new awareness, a field is strengthened so that this awareness is picked up by almost everyone!

It is time we begin to realize that you and I are far more alike than we are different.
We are all fellow beings travelling the road of life together.
We do not line in isolation.
We are all interconnected.
We all live in one world.
We are affected by a lack of harmony of any type anywhere on the planet – even if we are not consciously aware of it.
We are not separate.
What we say and do can affect the well-being of all of us.
We know that our health may be affected if we live among diseased people.
What we are beginning to learn is that our peace of mind may be affected if we live among disturbed people.
Our happiness may be affected if we live among unhappy people.
Our love may be affected if we live among clashing, unloving people.
Let us challenge our present approaches and rethink old assumptions.
It takes a strong person to be able to lovingly but directly communicate what he or she wants to someone who disagrees – and acts hostile.
You will increase your skill in helping the world when you learn to be mentally flexible.
This means being able to constantly blend back into creating an experience of life as a whole with appreciation, cooperativeness and love for the people around you – even when they oppose you.
Any problem created by the human mind can be solved by the human mind.

(From the book: “The Hundredth Monkey” by Ken Keyes, Jr. The book is not copyrighted and the material can be reproduced in whole or in part).