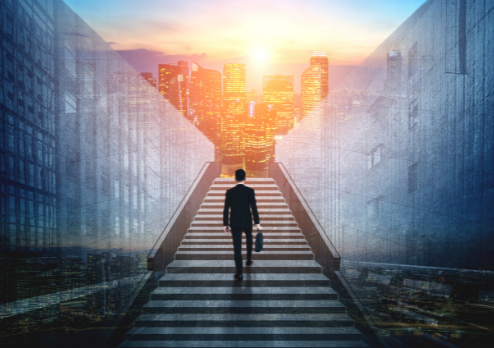 
A career is never a straight line but a winding path riddled with sharp turns, deep pits, and rough roads. In short, it is not an easy journey. Whether you are a chef or an engineer, a freelance blogger or an investment banker, it is tough to survive and thrive. At every nook and cranny, you will find a new challenge that will be scarier than the previous one. Failure will knock at your door, sometimes more frequently than you can imagine. Days will appear gloomy, and success will appear as a figment of imagination. Failure is never colorful. It is grey and dark that can make you feel low. So, how does one find motivation when you are at your lowest? Turns out, it all comes down to choosing one between a “red pill” and a “blue pill” as shown in the movie, Matrix. You can take the latter, remain ignorant and do nothing about your circumstances. Or take the red pill and fight. From the owner of the famous Pizza joint in your neighborhood to entrepreneur and billionaire Elon Musk, everyone has fought their worst nightmares to achieve success. The thing about success is that it cannot be found without a few setbacks and bumps and bruises. Instead of running away from it, see a setback as an opportunity to learn something new and become better at what you do. Here are a few tips to deal with failure in your career and climb the success ladder.

Treat failure as a learning opportunity
No one likes to fail. It is an awful feeling that can hurt your confidence, and in worst cases, compel you to quit. But failure is not evil but a blessing in disguise. It is a mirror that can show you where you went wrong, what will work and what will not. It can help you plan better and prepare for future challenges. The more you fail, the better your chances get to find success in the days to come. You just have to see a failure for what it is and not something earth-shattering. Many treat a setback as the end of the world, which it is not. Failures do not define who you are or what you can become in future. So do not see them as a spanner in the works. Change your attitude and keep moving forward.

Learn from those who endured and survived
Anyone who has made it to the end has a story to tell; a story of courage, survival, and triumph over failure. Take Dwayne ‘The Rock’ Johnson for instance. He is the epitome of success, one of the highest-paid actors in Hollywood and a beloved name in the industry. Before cementing his status in the world of wrestling, he spent most of his days broke and jobless. The Apple co-founder, Steve Jobs was ousted from his company, which he built from scratch with his sweat and blood, only to found another billion-dollar firm, Pixar, and re-joining Apple as its CEO. Brian Acton was rejected by Facebook before he sowed the seeds of WhatsApp and sold his venture to the social media giant for $21.8 Billion. The world is full of such rags-to-riches stories that tell the same story of success and give the same message of never giving up.

Think rationally
No matter what catastrophe occurs, an apple will always grow on an apple tree. The same goes for an orange, a mango, or any other fruit. Likewise, a failure cannot change who you are and your capabilities. Still, when you face a setback, often, it becomes the last stop of your journey. You lose sight of what is real and what it is not. Fear and disappointment cloud your rational thinking and replace it with loathing and berating. Do not let this happen to you. When you experience a challenge, deal with it. And you can do this when you are thinking rationally. Revisit your failure. If your presentation was bad, ask yourself why. Take feedback if possible. Then work on making it right the next time instead of wallowing in self-pity.

Step out of your comfort zone
Your comfort zone is the biggest enemy of all. It is like a wolf in sheep’s clothing that looks harmless from the outside but vicious from close. It is safe to say that it has killed more dreams than anything else. When you become used to your comfort zone, it becomes quite difficult to escape from it. And the more time you spent inside your comfort zone, the less competitive and diligent you tend to become. As the saying goes, our comfort zone is a beautiful place but nothing ever grows there. It keeps you from learning new things, taking bigger responsibilities, and growing – all of which is a recipe for failure. So, if you wish to avoid setbacks, step out of your comfort zone and start getting your hands dirty. Do not run away from working long hours or during a weekend. If the opportunity demands, give everything you can no matter how tiring you may feel. Because that is what winners do.

Keep hustling
Success does not come overnight. It takes time and patience, just like everything valuable in life. Until the day you achieve your goals, the journey is all about hustling and giving your all. Kobe Bryant’s work ethics are popular not just in the realm of basketball but in the whole world. He used to be at the gym at 4 in the morning. Even when he won championships and earned several individual accolades, he never stopped practicing. He kept hustling because it is not about achieving perfection but staying consistent. If you face rejections, tell yourself, “it is okay”. Tomorrow is a new day to start all over again. Keep doing this until your rejections turn into success.

Do not indulge in self-pity
Failing at something does not make you a failure. Quitting does! A setback is not your identity but an experience that can teach you a lot, but only if you are willing to learn. It can give your purpose a new meaning, a new direction that can lead you straight to your dreams. It has a lot of potential that many people tend to underestimate. Instead, they drown themselves in tears and self-pity. Thoughts like ‘I am not good enough’ begin to take charge. These are the defining moments, however, when you need to separate yourself from a setback, learn from it, and move on. Do not let it trick you into believing that you are anything less than anyone, because you are not.
Connect with me
more
Previous Post
Next Post