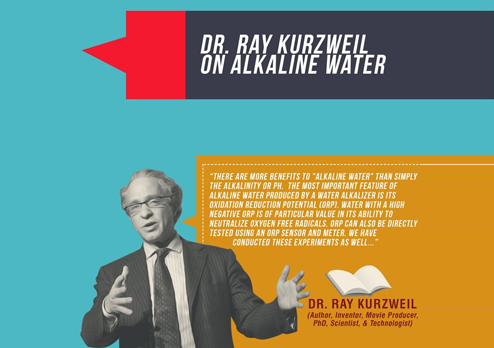 (Dr. Ray Kurzweil is one of the world’s leading inventors, thinkers, and futurists and has been awarded 19 honorary doctorates, honored by 3 US Presidents and is recipient of many of the nation’s highest awards for excellence).

Dr. Ray Kurzweil and Dr. Terry Grossman, authors of “Fantastic Voyage Live Long Enough to Live Forever” state the following: “Consuming the right type of water is vital to detoxifying the body’s acidic waste products and is one of the most powerful health treatments available.”

Ray Kurzweil drinks 10 glasses of Alkaline Water a day and believes it will help him live a long and healthy life. In this “Q and A” he answers few questions about Alkaline Water based on his own research and knowledge.

Question: I have read on the Internet that it is not possible to create alkaline or acid water from pure water and that water that is pure enough to drink cannot be split into alkaline and acid components. Is this true?

Ray Kurzweil: As responsible scientists, we had the same skepticism when we first heard about alkaline water. Therefore, the first thing we did was to purchase a water alkalinizer as well as an accurate electronic pH meter. We ran tap water with pH 7.1 from our home faucet into the device and found that the water coming out of the alkaline outlet had a pH of 9.5 (indicating very alkaline), while the water from the acid outlet measured pH 4.5 (indicating very acidic).

We repeated this experiment with a variety of tap waters obtaining alkaline outputs with a pH ranging from 9.5 to 9.9. It is true that “pure” or distilled water cannot be ionized. If you were to try to “split” distilled water, it would not work. Tap or spring water, however, has dissolved minerals in it. It’s the minerals in the water; primarily calcium, potassium and magnesium that allow water to be “split” by an electric current into alkaline, “electron-rich” (i.e., containing negatively charged ions that can engage in chemical reactions to provide electrons to positively charged free radicals) and acid, “electron-deficient” components. Individuals who say it is not possible to split tap or spring water are misinformed.

One site on the Internet states “Ionized water is nothing more than sales fiction; the term is meaningless to chemists. Most water that is fit for drinking is too unconductive to undergo significant electrolysis.”

That statement is easily shown to be incorrect with a simple pH meter and an electrolysis machine. Most tap waters run through the machine produce highly alkaline water as measured by a pH meter.

Question: Since you advocate drinking alkaline water, why not simply mix something like sodium bicarbonate (baking soda) with water and drink that? There are, in fact, alkaline waters sold that are made by mixing water with bicarbonate. Wouldn’t that work as well and be much less expensive than a water alkalinizer?

Ray Kurzweil: There are more benefits to “alkaline water” than simply the alkalinity or pH. The most important feature of alkaline water produced by a water alkalinizer is its oxidation reduction potential (ORP). Water with a high negative ORP is of particular value in its ability to neutralize oxygen free radicals.

ORP can also be directly tested using an ORP sensor and meter. We have conducted these experiments as well. We found that water coming directly from the tap had an ORP of +290mV, while the water coming out of the water alkalinizer had a negative ORP. The more negative the ORP of a substance (that is, the higher its negative ORP), the more likely it is to engage in chemical reactions that donate electrons. These electrons are immediately available to engage in reactions that neutralize positively charged free radicals. This is the key benefit of water produced by a water alkalinizer that is not available by simply drinking water than has had some bicarb or other compounds dissolved in it to make it alkaline.

Although water mixed with bicarbonate is indeed alkaline, it does not have a negative ORP; rather it has a positive ORP, meaning that it is unable to neutralize dangerous oxygen free radicals. Alkaline water produced by running tap water through an electrolysis machine does have a high negative ORP, meaning that it does have the ability to neutralize oxygen free radicals. We have confirmed these ORP measurements through our direct tests.

Question: OK, why is it important to drink alkaline water with a high negative ORP?

Ray Kurzweil: All chemical reactions occur with the transfer of electrons. Negatively charged entities are said to be reducing agents, meaning they are relatively electron rich and are able to donate electrons, reducing the charge of the entity with which they react. Relatively electron-poor entities are referred to as oxidizing agents, meaning they tend to pull electrons away. Thus, each substance in our body may act as either an oxidizing or reducing agent.

However, not just any negatively charged ion will be able to engage in the specific chemical reactions needed to neutralize oxygen free radicals. The HCO3- (bicarbonate) ions in alkaline bicarb water do not have this potential, whereas the OH- and mineral-rich water coming from an electrolysis machine (from tap water) does have this potential. That is implied in the negative value of the “oxidation reduction potential.”

Free radicals are among the most damaging molecules in the body and are highly unstable molecules that are oxidizing agents and are electron deficient. They are a principal cause of damage and disease in the body. Oxygen free radicals contribute significantly to a broad variety of harmful conditions in the body ranging from life-threatening conditions such as heart disease, stroke and cancer, to less severe conditions such as sunburns, arthritis, cataracts, and many others. Free radicals MUST get electrons from somewhere and will steal them from whatever molecules are around, including normal, healthy tissues.

Damage to tissues results when free radicals strip these electrons from healthy cells! If the damage goes on unchecked, this will lead to disease. For example, the oxidation of LDL cholesterol particles in arterial walls by free radicals triggers an immune system response that results in atherosclerosis, the principal cause of heart disease. The negative ions in alkaline water from an electrolysis machine are a rich source of electrons that can be donated to these free radicals in the body, neutralizing them and stopping them from damaging healthy tissues. Specifically, these ions have the potential to engage in the chemical reactions necessary to neutralize oxygen free radicals.

Vitamin C and E, grape seed extract and alpha-lipoic acid, for example, is all powerful electron donors. The vegetable-rich diet we recommend is alkaline and helps donate electrons to the body. Alkaline, electron-rich water falls in the same category. It can help with your body’s need for electrons to counteract free radicals.

Interestingly, we also tested vegetable juice with the ORP meter and found that it also has a high negative ORP, meaning that it is able to neutralize oxygen free radicals. So at least one of the important benefits of eating vegetables can be obtained from drinking the high negative ORP alkaline water from an electrolysis machine.

Another benefit of drinking alkaline water is that it assists in the absorption of minerals. We know that if the body is not absorbing enough minerals, it will rob minerals from the body’s mineral reserves, chiefly calcium from the bones.

It is well known that many chronic diseases result in excess acidity of the body (metabolic acidosis). We also know that the body tends to become more acidic due to modern dietary habits and lifestyles and the aging process itself. By drinking high negative ORP alkaline water, you combat metabolic acidosis and improve absorption of nutrients.

The blood is carefully buffered to keep it in a narrow range between pH 7.35 to 7.45. The body keeps blood pH stable by utilizing alkaline buffers, chiefly bicarbonate, to neutralize acidic liquids (such as colas, which have a pH as low as 2.5) and other acidic products and byproducts. But as the blood stream receives these acidic substances, the alkaline buffers get used up.

Drinking alkaline water helps reduce the burden on the limited alkaline buffers which are needed for the body’s natural detoxification processes.

Question: Is there research that actually shows the benefits of drinking alkaline water?

Ray Kurzweil: A number of studies are summarized below. One study described below suggests that alkaline water encourages “friendly” anaerobic microflora in the human intestinal tract, and discourages “unfriendly” aerobic organisms.

“Many diseases of the intestine are due to a disturbance in the balance of the microorganisms inhabiting the gut. The treatment of such diseases involves the restoration of the quantity and/or balance of residential microflora in the intestinal tract.

It is known that aerobes and anaerobes grow at different oxidation-reduction potentials (ORP). The former require positive E(h) values up to +400 mV. Anaerobes do not grow unless the E(h) value is negative between -300 and -400 mV. In this work, it is suggested that prerequisite for the recovery and maintenance of obligatory anaerobic microflora in the intestinal tract is a negative ORP value of the intestinal milieu. Electrolyzed reducing water with E(h) values between 0 and – 300 mV produced in electrolysis devices possesses this property. Drinking such water favors the growth of residential microflora in the gut. A sufficient array of data confirms this idea.”

Dr. Grossman has also had many of his patient’s report of health benefits they have experienced from drinking alkaline electron-rich water.

Question: How can alkaline water with a pH of 9 or 10 be expected to affect the body when the pH of the stomach is 2 or less?

Ray Kurzweil: It is important to remember that large amounts of hydrochloric acid are present in the stomach primarily when food is there. There is only a small amount of acid in stomach when it is empty, and this can be easily overcome when alkaline electron-rich water is consumed. Therefore, in order to gain maximum benefit, we recommend drinking alkaline water in between meals. Water consumed between meals will very quickly pass through the stomach and the GI tract.

Enagic® from Japan! Taking Wellness to the Masses through their World Class Water Ionizers!! (Enagic® is the Gold Standard of the Water Ionizer Industry)

The Choice for Better Health is ultimately yours!

Call us today for a Live Demonstration of Kangen Water®

Stay Smart, Stay Safe and Stay Protected! Be Happy; Be Healthy; Be Alkaline!